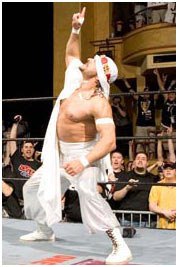 Sabu has been released from the WWE.

WWE.com -- WWE has come to terms on the release of Sabu. We wish Sabu all the best in all future endeavors.

PWInsider.com -- Former ECW World champion Sabu is gone from World Wrestling Entertainment, according to several sources. Sabu arrived hours late for tonight's scheduled Smackdown/ECW taping in Baltimore, Maryland and didn't even have his ring gear with him. I am told he was sent home from the taping and has been/will be released by the company.

Sabu, one of the trendsetters of the original Extreme Championship Wrestling, signed with WWE a year ago as part of the re-launched ECW brand. Sabu received a big push early in the brand's run, including challenging ECW champion Big Show at last year's Summerslam PPV before being deemphasized as a focal point.

It was good to see Sabu for the time he spent in the WWE. I look forward to seeing him where ever he may popup.

The ECW Originals have all been moved to the roll of enhancement talent. I think this is a good roll for them. I think stars like CM Punk, Lashley and Kevin Thorn should be brought up to a higher level within the WWE.

The one exception of the ECW Originals is RVD. RVD should be in the top tier of the WWE. He has all the skills to be. He is completely over with the crowd. However if all the internet news is correct RVD may be leaving the WWE this summer. I hope this isn't true.