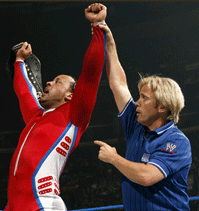 First off let me say to the WWE I really like the ALL brand (Raw, Smackdown, ECW) PPVs better than individual brand PPVs. I think it provides for better matches. Also I like that ECW is getting a better foothold in the PPVs.

Overall I think Judgment Day was a good PPV. For the most part all the matches were solid.

No real match stood out for the match of the night, but my favorite was CM Punk/Elijah Burke. I think that one stood out for me because I believe these two could be in the upper tier of WWE within a year or so. Whenever Vince McMahon decides to let go of the title, I hope these two will be in the title mix fairly soon.

Speaking of Vince McMahon. "Way to kill a fast pace power match with a crappy twist, Vince." I only gave the Bobby Lashley match ** because of it. The match was very explosive. Bobby Lashley came out and owned the ring. He won by pinning Shane McMahon, but then Vince McMahon announce Lashley had to pin him to get the title.

Donna's favorite Power Ranger, MVP, two straight falls against Chris Benoit for the US Title. A technically sound match that even followed the storyline from last Friday's Smackdown. Good job to both.

And speaking of wins, Edge beat Batista in a clean and undisputable victory. That's right an Edge match without controversy. I know it makes me afraid too.

All the other matches were good, and I'll let others comment on them.