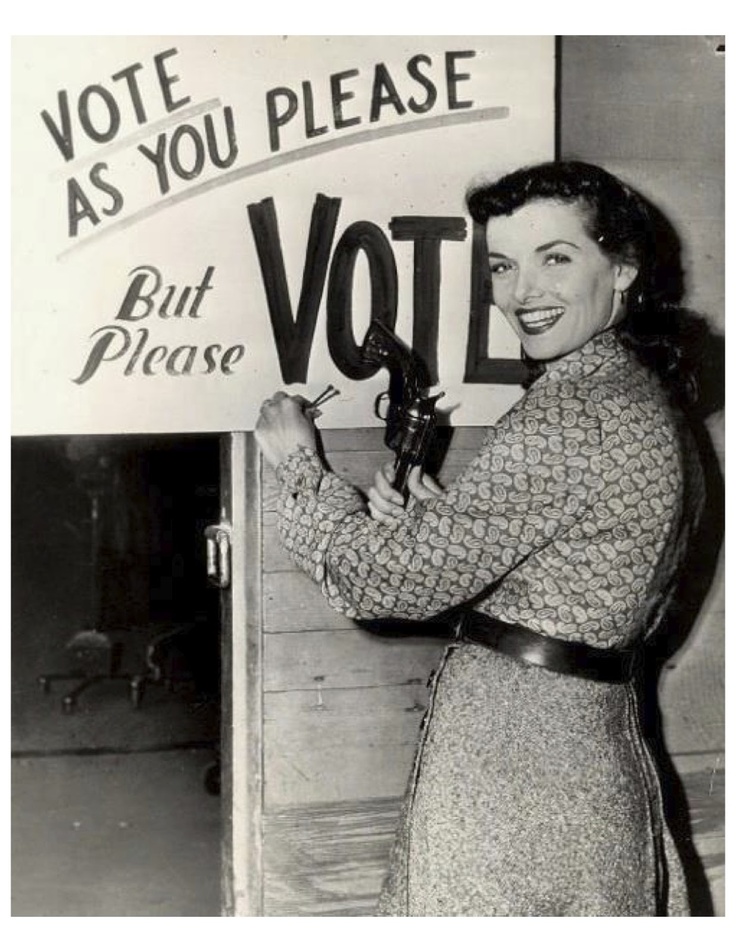 I was asked about that picture I used yesterday. So here it is. There is nothing wrong with the picture itself. It was just inappropriate to use as clipart for the post I used it on.

It's an old black and white picture of Jane Russell putting up a poster that reads "Vote as you please, but please Vote." She's holding a nail in one hand and a gun in the other. It appears she's using the gun to hammer in the nail.

Historically speaking there is nothing wrong with this picture. She was big in Westerns at the time (1940s & 50s), and this was a promotional picture to get people to vote. A worthwhile cause.

In fact here are a few lists of westerns and other movies she's been in:

What made me pull the post was the gun. Using a gun as a hammer is an incredibly stupid thing to do. Guns are not toys, and should not be treated as such.

And with all the news that has happened over the last few weeks using a gun picture would be insensitive to say the least.

For the record I don't like guns. They're not my thing.

I am not anti-gun however, but I'm definitely not with the pro-gun NRA AR-15 types. I like and support many of the latest gun-control measures trying to get through congress.

If you want to own a gun, that's fine with me. I have lots of friends who hunt and enjoy gun sports like skeet.

Just please take the safety courses, practice safe handling, and keep them locked up away from curious children.